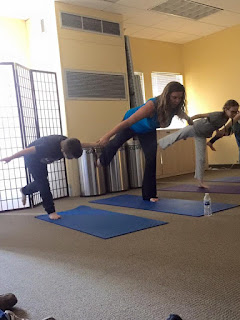 Early last month I taught a 4th/5th grade yoga class for the first time. For some reason, I left feeling that it was the worst class I had ever taught. The children were acting silly and wouldn't listen to me at all. I kept getting louder but nothing was changing, hence, I'm already a loud person.  The children would then be asked to take a break, which meant to leave the group for a minute and then come back. They would return from their break doing the same thing they did when they left, such as talking, or bothering the child next to them.
At one point in the class I thought I had a brilliant idea since I would bring in chairs and do chair yoga. Well that didn't work, the children were falling out of the chairs. The chairs were stools so it became very dangerous quickly.  After I left I felt I was the worst teacher EVER! It would be two weeks before I would go back and teach them again. Every day before I went back in I thought of ways I can make it different and get the children to love doing yoga.
When I walked back in the classroom for our second class I was nervous to what will happen or what to expect. This time I had a plan but I wasn't sure how it would be received from their end.  I walked in with a strong voice as I was talking to the children. I had all of the tables moved so we had more room. I started the class with the expectations and what would happen when the expectations weren't met. If there was talking and children being silly we would go into jumping jacks and push-ups for the entire class.  I decided to call the class "Bootcamp Yoga".  At first they thought I was kidding. I started the class with 30 jumping jacks and 20 push-ups. Of course, they had to test me so it took 17 minutes before we started the breathing exercises that I normally start with every class at the beginning.  They were complaining but doing what I asked them to do at the same time.  Once they realized I was serious the talking stopped.
After the 17 minutes of intense workout they finally laid down with one hand on their heart and the other hand on their belly, bringing their awareness to their breath.  The room was quiet!  As I brought them through a sequence of yoga poses they were following directions and here and there some of the children would test the boundaries and of course we would go back into jumping jacks. When I left the class I felt it went well since I was able to get the children in their bodies and paying attention to their breaths.  But I felt I was a really mean teacher and that is also not a good feeling to leave with after teaching children.
Well, when I walked in to teach my third yoga class with this group I was prepared to go intense again.  But I was thrown off by the children's reaction to me when I walked in.  Everyone turned around and said "Hi" to me and they had the biggest smile on their faces. This was the first time they reacted this way towards me. I was shocked that they wanted to see me again and were happy when I walked in the room. That made my day! This time we did start with the jumping jacks and push-ups but it only took 10 minutes before we can start the breathing activity. The children loved the class!!! This was a friendly reminder to me of what I teach parents and educators, that children need consistency and boundaries and even when you feel you are mean they most likely aren't thinking that of you.Have fun teaching!!!! Vanessa Kahlon, MA