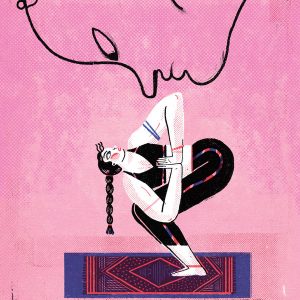 Repost below, from the New York Times, an article from OM Schooled founder Sarah Herrington on the importance of ethics, with codes and consequences, in the field of teaching yoga. Of course we have the yamas and niyamas, but we should consider more as a community to keep all yoga students safe and well! This is especially important with children’s yoga, where considering healthy boundaries, safe touch and other topics need to be specifically addressed for young minds, lives, bodies.

To safe and happy yoga!

I was relieved when Bikram Choudhury, the 73-year-old founder of Bikram yoga, was finally served a warrant for his arrest late last month, after failing to pay nearly $7 million in legal fees he owes for a sexual harassment lawsuit. Many in the yoga world had been waiting for that moment, after years of rape and assault claims against Mr. Choudhury, the millionaire creator of a 26-posture “hot yoga” sequence and studio system. But the news brought only a grim satisfaction; many of us wish he’d been arrested for the assault claims themselves.

Unfortunately, the case of Mr. Choudhury is not unique. In 2016, a beloved teacher in the New York City-based Jivamukti Yoga center, known for its celebrity clientele, was sued, along with the center and its leaders, for sexual abuse by her mentee. John Friend’s Anusara community was rocked and dissolved in 2012 after he was discovered having affairs with married students and performing Wiccan-like sex rituals. Kripalu’s Amrit Desai was accused of sexual misconduct and abuse of authority in 1994 and a $2.5 million settlement was paid (the Kripalu Center in Massachusetts divorced itself from Desai and reorganized). And there are, of course, countless under-the-radar stories of yoga teachers coming on to students or touching them inappropriately in class.

This must stop. As a practitioner of yoga for 20 years who has been teaching for a decade, I know that people often approach spiritual practices like yoga and meditation when they are vulnerable. They come recovering from broken bones and hearts, and usually at some greater personal crossroads. They come with trauma, addictions or eating disorders. They come after divorce. They come with hope.

In this state of vulnerability, it is absolutely critical that students feel safe. Teachers, like therapists or educators in other fields, have an inherent power, which can be used to either heal or exploit. But because it is also easy to conflate the goodness of yoga with the teachers themselves, instructors can benefit from an aura of ethical conduct, or even holiness — what some call a spiritual blanket that protects those who abuse their power. While it is up to students to discern between teacher and teachings, those in authority have a responsibility to protect.

According to the 2016 Yoga in America survey co-sponsored by Yoga Journal and Yoga Alliance — the largest nonprofit in the United States representing the yoga community and providing teacher-training requirements — there are 36.7 million yoga practitioners nationwide, 72 percent of them women. Though Yoga Alliance has published a bullet-point code of conduct, few know it exists until they are explicitly looking, and by then it may be too late.

I have personally seen things go wrong. Early in my practice I became involved with a meditation teacher and learned, after the breakup, that he had dated students serially. I lost my community. I’ve received inappropriate sexual Facebook messages from well-respected teachers and have had my bottom slapped (not an adjustment) in a balancing pose. Though these actions are not as serious as the egregious behavior Mr. Choudhury and others have been accused of, they provided a personal window into the hurt and confusion crossed boundaries can create.

Yoga transformed my life: healing a back injury, giving me tools to work with my anxiety and providing a spiritual home. Had it not, I would have quit. Some victims have quit, and face years of trauma from what should have been a refuge from the hurt of life: spiritual practice. This sort of violation denotes rape on many levels: spiritually, mentally, emotionally and, yes, sometimes physically.

When I began teaching yoga at an all-girls charter school in Lower Manhattan, we took the first class to create a “yoga contract.” Girls from 5 to 12 years old brainstormed and signed lists of rules to “keep everyone safe and happy” during practice. Rules they themselves invented included “respect others’ space” and “use active listening.” As the teacher, I signed, too. We ended each class with a Sanskrit chant that translates to, “The one true teacher lives in the center of your heart.” I wanted these young girls to know, though teachers are helpful guides, the one true authority is inside of them. I wanted them to carry this lesson forward into their adult yoga world as women. Mr. Choudhury and others like him could learn plenty from these girls.

I’m hopeful the arrest warrant for Mr. Choudhury will ignite this conversation in spiritual communities. I believe all organized yoga teacher training should include training in ethics and, if affiliated with Yoga Alliance, point students toward that resource. Each community center, meditation group and yoga studio should post a code of ethics, as Jack Kornfield’s Spirit Rock community recently did. Every center should have a formalized, safe place to report abuse seriously and anonymously. Even secular yoga studios should provide this service, alongside mats and towels.

We cannot rely on karma alone.

-Sarah Herrington is an author, yoga teacher and program administrator for the yoga studies program at Loyola Marymount University in Los Angeles. She runs the kids teacher training OM Schooled.